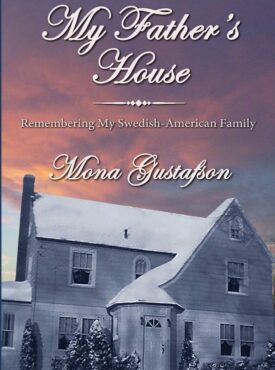 “My Father’s House” has recently been recognized as a finalist in the “New Generation INDIE Book Awards.”

In the year 1910, at age twenty, Karl Artur Johan Gustafsson leaves Sweden to follow his older siblings to America. Renamed “Carl Arthur Gustafson” at Ellis Island, he begins a new life in Forestville/Bristol Connecticut where he falls in love with and marries Jennie Anderson. Together they build their “house,” guiding their family through the rapidly changing events of the 20th century. In this multi-layered, multiple-generational story, their third child takes her readers on a journey through WWI, the Great Depression, WWII, changing technologies, changing roles, and the tumultuous sixties and seventies.

Click here for family trees for the Andersons and the Gustafson’s.

Click the REVIEWS tab (above) to read some of the comments coming in for My Father’s House.

Read the reviews from The Bristol Press and from the Sun Sailor!

Excerpt from The Bristol Press:

Mona Gustafson [Affinito]’s book, “My Father’s House,” provides a window into the past, chronicling her Swedish immigrant family’s life in Forestville from 1910 through the 1970s.

Gustafson [Affinito], who was born in 1929, lived in Forestville until she was 27 years old and fondly remembers the experience.

“I feel a lot of gratitude to have grown up in Forestville; I was very fortunate,” Gustafson [Affinito] said. “How many people can say that they spent so much of their life growing up in one home, sharing a backyard with their best friends and walking to school every day? I lived in that home until I got married at 27 and I visited it again with my parents when I became pregnant with my son in 1957. But, while the house is still standing and has an interesting history itself, the title ‘My Father’s House’ is more house in a Biblical sense. It is referring to my father’s family.”

Excerpt from the Sun Sailor:

Mona Gustafson [Affinito], 91, is a resident of the Waters of Excelsior. While some people spent their time bored in quarantine due to the COVID-19 pandemic, she was busy publishing two books.

Gustafson [Affinito] has written books on forgiveness as a psychologist and a book on the fictional life story of the biblical Job’s wife. Since COVID-19 began, she has published “My Father’s House” and “This Sucks! I Want to Live.”

Gustafson [Affinito] felt the urge to write “My Father’s House,” which is the story of her family’s life in the form of a novel. She had spent years researching the book. Her sister was worried that she wouldn’t portray their father well, but according to Gustafson [Affinito], that would be difficult to do because he was a very special man.